Made it through another season - I can't believe I'm about to celebrate 2 years in my studio, it feels like it was only 10 minutes ago I was painting over obscenities that were left on the wall when I moved in! Here's a quick comparison between the day after I moved in and today - no more window, but it's somehow a lot brighter now! 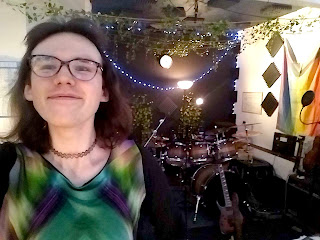 Prefers album 1 should be announced any day now, with Prefers 2 in hot pursuit alongside the Chasmhead album. I expect this year will also see the long awaited Earth Drowning record that I've been putting off until I get a chance to mix it!

I'm still getting a whole load of drum practice in - I feel endlessly frustrated that I have no time to sit down with a camera and track some playing that isn't almost 2 years old, so hopefully this year I'll get around to that and start sounding online like I do in real life! Normally I can just leave a camera rolling at gigs for that, but I'm not expecting the gigging scene to go back to normal until 2023.

I'm leaving Pirate Studios at the end of January so I can focus on teaching and session work instead - which means I'll be getting to the student waiting list at long last! If you've not heard back from me, you're welcome to drop me another email to kick me into action, but fingers crossed I'll clear the backlog over the next few weeks! As always, my 4pm-7pm is usually quite busy, but since I'm teaching in a couple of different timezones at the minute, that might not be an issue for whoever's reading this - so make sure you drop me a message and we'll figure things out from there!

Here's to another year full of music - and hopefully finally a couple of releases since the pandemic has blocked everything up recently!