Time flies when you're having fun! I somehow forgot to update this for 5 months - and you know it's bad, because after my last post about a Radio Eroticism album, this post is about another, totally different Radio Eroticism album I'll be releasing hopefully in the next few months, once I get 60 seconds to finish mixing it! The long-awaited Earth Drowning record with Herian Egan on violin and additional vocals is finally done and sounds very cool - I won't publish an official release date, since the last time I did that was "Spring 2020", which definitely didn't happen, but it definitely shouldn't overrun by another 18 months!

Now that the gigs are starting to come back, I've played a couple of gigs recently with Scriptures, and have a few more upcoming with Great Manta and Heart Beats Funk! It's great to be back on the scene, especially since I've been locked in a rehearsal room for the last 2 years, so I'm able to get away with even more cool stuff to upset other band members with 7:3 polyrhythms and horrible metric modulations, not least since taking a couple of lessons with Virgil Donati and Chad Wackerman over the summer - two of my musical idols, and certainly two of the drummers I've learned the most from, even before taking lessons with them! 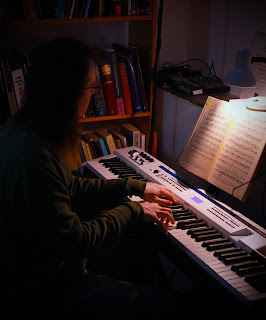 I've also started taking vocal lessons with Marianna Zappi, which should make for some significant improvements to the Chasmhead record that's still in-progress! The Prefers to Hide in the Dark EP is pretty much finished, so once that's mixed we'll light the fuse on releasing that pretty soon and start working on even more cool music - on top of the solo material I've been slowly putting together over the last few months! Karate School of Peace and Harmony has asked me to play some keys for an upcoming EP that I've already heard and am very excited to be involved with, but I've no idea when that will come to fruition, nor the Great Manta album I tracked drums for last year. I expect that 2022 will mean an awful lot of projects I've been part of will suddenly all launch at once, so it should make for quite an exciting year!

As always, I'm working a lot and sleeping very little - normally that means I finish off by saying "please contact me so I can fit you in" but I'm starting to run up against the raw limitations of linear time - so if you're interested in hiring me as a teacher, tutor, performer or producer, best hit my Contact page sooner rather than later, because there's a very real chance I'll have to reboot the waiting list. Still, there are worse things to be than busy in a crisis...!